Want to drive a real-life transformer? Get in line! Or go to Japan…. 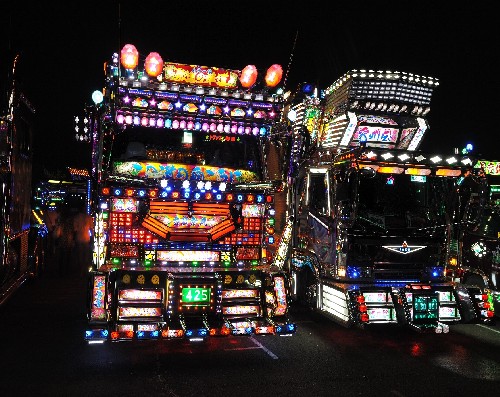 They’re called Dekotora, which basically just means “decorated truck”. And they are some seriously pimped out trucks! You’ll find them mostly in Japan, where the subculture has its largest following. There are really no rules as to how you can decorate your truck: some are lit up like pinball machines, others are bound in sparkling chrome and with artfully embellished bumpers. Many of them look like fairground rides… Or Christmas trees.

Bet this driver spends a while polishing…

The real popularity of Dekotora started after the Truck Guys (Torakku Yarō) film series was released in 1975. Predictably, it was a comedy stroke action film series, involving a bunch of guys, roaming around in their super-styled-up trucks. Although it wasn’t the first emergence of Dekotora in the world (or Japan), it sparked the real flame that is now a subcultural phenomenon.

Well, if you really love your rig…

But this subculture isn’t just for hobbyists. These trucks are actually some people’s everyday drives! Yes, these trucks are actually in daily use, driving up and down the country, hauling loads, delivering goods. Dedicated Dekotora drivers spend their salaries on beautifying their rigs: some spend the equivalent of hundreds of thousands. Taking a look at the adornments, it’s no surprise: these designs can be quite luxurious: inside and out. Some even have chandeliers; no joke.

We’re not about to try our hand at it, but if you do, let us know! Send them in, and post them up using our hashtag #YugoWeGo